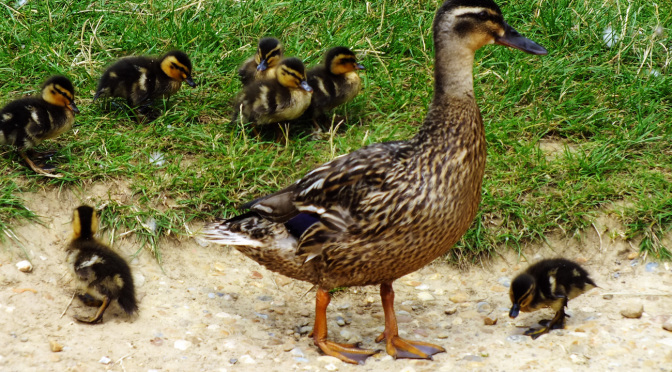 The woman who stopped her car in the left lane of a Montreal area highway to herd ducklings to safety, which led to the death of a motorcyclist and his teen daughter, will not spend the rest of her life in prison, Canadian media outlets report.

Emma Czornobaj, 26, was sentenced Thursday to 90 days in jail, no driving for 10 years and 240 hours of community service. She will report to jail on Jan. 10, serving out her sentence on the weekends, the Montreal Gazette, CTV News and CBC News report.

Though the maximum sentences for the crimes for which Czornobaj has been convicted are life in prison, thousands of people signed petitions asking for leniency for Czornobaj. The family of motorcyclist Andre Roy, then 50, and Jessie Roy, 16, who rode on the back of the motorcycle, have said Czornobaj did not show remorse or apologize to them in a timely way when she had the opportunity.

Defense lawyer Marc Labelle did not respond to voicemail messages left with his office. Labelle has said that his client “was stupid” but did not act under any ill will.

On June 27, 2010, Czornobaj was driving westbound along Highway 30 in Candiac, Quebec, a suburb of Montreal, when she came upon seven ducklings in the road. She stopped her Honda Civic in the left lane of the highway to make sure the ducklings were OK. While she was stopped, Roy’s motorcycle crashed into the rear of her car.

Czornobaj initially told police she had her hazard lights on, but witnesses testified in court that she did not, according to the National Post.

An expert with the Quebec national police, the Surete du Quebec, estimated that Roy was driving his motorcycle at about 65 miles-per-hour when he struck the back of Czornobaj’s Honda Civic, according to the National Post. Andre Roy died immediately and Jessie Roy died later at a hospital.

The case has stirred emotions in Canada. Thousands of people have signed a petition on the website Change.org asking for leniency for Czornobaj, and a recent editorial declared that punishing Czornobaj would not bring back the father and daughter killed.

But the family of the victims have said Czornobaj has not shown compassion toward them. Though Czornobaj publicly apologized to the family in July, she never did in person when she had the chance, Volikakis said.

“She never once tried to contact me,” Volikakis said, explaining she once ran into Czornobaj in a restroom during the trial. “She held a straight face and looked the other way,” Volikakis said.

Czornobaj’s mother, Mary Hogan, said during a hearing that the incident had changed her daughter.

“It was something she couldn’t talk about or share with us at all,” Hogan said. “She just couldn’t accept that it had happened.”

Czornobaj’s mother told the National Post that her daughter was on the dean’s list and headed for a successful life when the accident happened. Now, no one will hire her. “It changed who she was at her very core,” Hogan told the news organization.

If you have been involved in an accident caused by another contact AA Accident Attorneys at 1-800-260-2577 for a free consultation. You may be entitled to financial compensation!