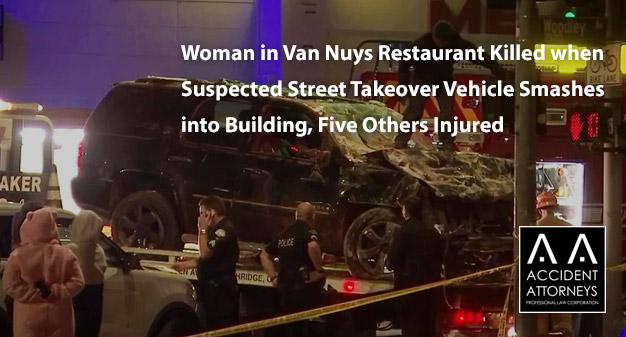 VAN NUYS, CA (October 26, 2021) – A woman who was inside a Van Nuys restaurant was killed on Sunday night when a vehicle smashed into the building. A street takeover is suspected in the October 24 crash, which occurred at 7600 Woodley Avenue and Saticoy Street.

The time was roughly 8:05 p.m., according to Margaret Stewart. Stewart is a spokesperson with the Los Angeles Fire Department.

A vehicle–described as as a Chevrolet Tahoe–smashed into the restaurant, reports say, and struck a patron inside. A person died at the crash site.

She was identified only as in her twenties, according to Stewart. The victim’s name and city of residence have not been reported.

Five other people were injured in the crash. The types of injuries the people suffered, and their current condition, are not known. None of the people have been identified in reports.

The person who had been driving the vehicle was identified as Luis Carrillo-Castaneda, 18 years old. According to reports, Carrillo-Castaneda is suspected of participating in a street takeover at the time of the crash.

Reports say he had been traveling at fast speeds and executing donuts (a driving maneuver) at the intersection while a law enforcement helicopter pursued him.

Police believe Carrillo-Castaneda skidded roughly 200 feet while trying to brake, judging by the skid marks the vehicle left, reports say, before he smashed into the building. The vehicle continued another 75 feet inside the building, according to reports.

Investigators are continuing to gather information regarding the crash. If anyone has information about the incident, the person can call Detective Barragan or Detective Davis, who are with the Valley Traffic Division of the Los Angeles Police Department.

If you or a loved one has been injured in an auto collision, the AA Accident Attorney strongly encourages you to call our Van Nuys car accident lawyers. Your experienced Car Accident Lawyer Van Nuys will provide you with the best legal representation and guidance that you need. Our offices are conveniently located throughout California and we conduct regular travels in the region to meet with clients. Contact Car Accident Lawyer today.