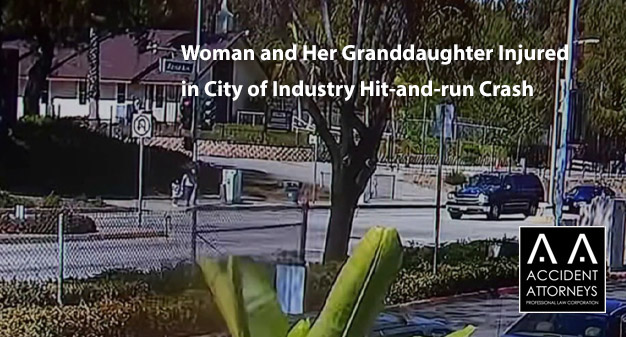 CITY OF INDUSTRY, CA (September 30, 2022) – On Wednesday afternoon in the City of Industry, a hit-and-run driver struck and injured a woman and her granddaughter. The September 28 crash occurred at Gemini Street and South Azusa Avenue.

Reports say video from a surveillance camera captured the incident.

A woman and a child exited a bus, according to reports, and walked to where Gemini Street intersects with South Azusa Avenue.

As the pair walked in the crosswalk, a vehicle–which authorities allege was traveling at a fast speed–struck the woman and child.

The impact launched the two victims before they fell, reports say.

The driver did not stay at the crash site or help the victims, but fled the scene.

Responders helped the victims, and reports say they suffered injuries that were described as minor.

The two victims have not been identified.

Deputies with the Sheriff’s Department later located a person who is suspected of the hit-and-run crash, and arrested him.

Investigators are continuing their work on the crash. If anyone has information about the incident, the person can contact the Los Angeles County Sheriff’s Department.

Hire an Accident Attorney in City of Industry