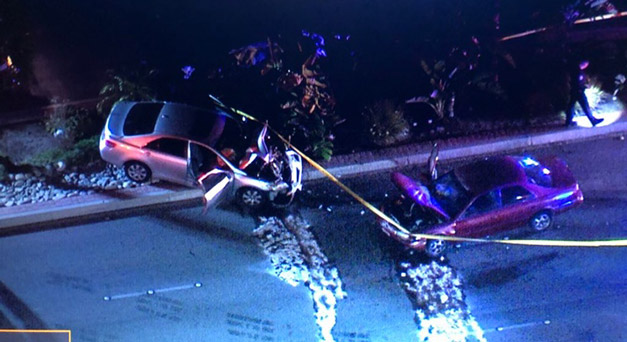 Westminster, CA (July 8, 2018) – The driver who let Santa Ana Police on a reckless pursuit was fatally shot when the chase ended in a head-on collision in Westminster late Sunday night, July 8th. According to Santa Ana Police Department Cpl. Anthony Bertagna, officers attempted to initiate a traffic stop on a maroon sedan sometime around 10:00 p.m. near the intersection of First and Jackson Streets in Santa Ana. As officers approached the maroon sedan, the driver fled and a pursuit ensued. The driver fled westbound on First Street which turns into Bolsa Avenue. At one point during the pursuit, the driver was seen throwing a gun from his vehicle, at First and Newhope Streets and continued driving until he reached Westminster. The driver crashed into a vehicle near the intersection of Magnolia Street and Bolsa Avenue where he continued westbound in the eastbound lanes of traffic on Bolsa where he collided head-on with a silver Toyota. The driver then exited the vehicle and attempted to flee the scene. The driver was pursued on foot by an officer where he produced a 2nd gun. That is when officers shot the driver. “He went down … died at the scene,” Bertagna said. An elderly man and woman were found inside the silver Toyota and were transported to a nearby hospital where they were listed in stable condition by medical staff. No officers were injured in the incident.