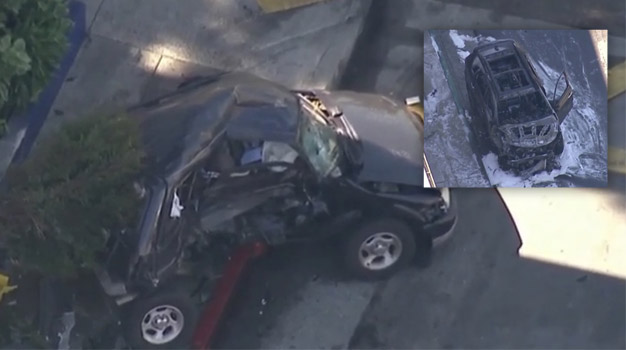 Whittier, CA (February 18, 2019) – The family of an innocent driver, who was killed in a collision with a suspect following a police chase Monday morning, gathered together to mourn their beloved with candles at the spot where he died. According to Whittier Police Department, officers on patrol came across a road-rage incident at the intersection of Greenleaf Avenue and Whittier Boulevard sometime around 11:00 A.M. As officers tried to intervene the suspected aggressor fled the scene. A chase ensued and the suspect attempted to ram at least 3 patrol cars as he tried to get away. The chase came to an end when the suspect in his Kia crashed into a Ford SUV in the 7200 Block of Newlin Avenue. The Kia burst into flames but the suspect was able to get out of the vehicle. As the suspect tried to flee, he was quickly apprehended and taken into custody. The suspect has been identified as Kevin Vargas, 34-years old of Santa Fe Springs. Vargas was treated at a local hospital in stable condition and is expected to face charges. The driver of the Ford SUV was transported to a local hospital and later pronounced dead by medical staff.

The victim was later identified by family as 61-year old Isaias Cruz of Whittier. “Isaias was an outgoing person who believed in God and always giving words of encouragement. He was the life of the party,” sister-in-law Connie Holguin said. Cruz was one of 11 children. His family said they believe he was given a second chance at life after almost dying a year ago because of gallstones and abdominal complications. “He went from 200 and something to 95 pounds. He was real skinny and he survived. But now to lose him like this – it’s sad,” Rodriguez said. Vargas faces numerous felony charges.