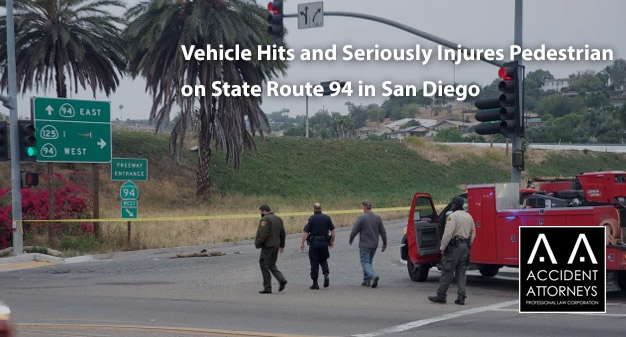 SAN DIEGO, CA (September 22, 2022) – Late in the morning on Wednesday in San Diego, a pedestrian who was walking on State Route 94 was struck and seriously injured. The September 20 crash occurred on the westbound side of the roadway, near the overcrossing for 25th Street and to the east of it.

The time was roughly 11:15 a.m., according to Jesse Matias. Matias is an officer with the California Highway Patrol.

Reports say the pedestrian was walking in the lanes of traffic and a vehicle, described as a Ford sedan, struck him.

Responders transported the patient to a hospital in the area. He suffered injuries that were described as major, and his condition is critical, according to reports.

The man’s identity–including name, age, and city of residence–has not been reported.

The person who was driving the vehicle remained at the crash site and cooperated with the investigation.

She was identified only as a resident of Bonita, 73 years old. Her name is not known from reports.

Investigators are at work to understand the crash.