Vehicle Hits and Injures Horse and Rider on Wells Ave. in Riverside 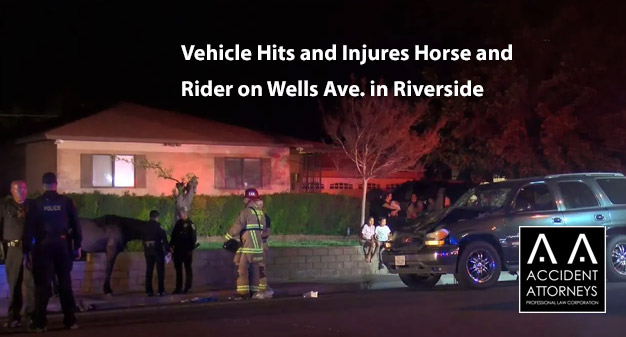 Vehicle Hits and Injures Horse and Rider on Wells Ave. in Riverside

RIVERSIDE, CA (May 9, 2022) – On Friday night in Riverside, a vehicle struck and injured a horse and rider. The May 6 crash occurred on Wells Avenue.

Reports say a vehicle–described only as an SUV–had been traveling on Wells Avenue and heading east. According to Ryan Railsback, who is an officer, the horse is believed to have walked in front of the vehicle.

The vehicle–which investigators think was not moving at a fast speed–struck the horse and rider.

Responders arrived and found the man down on the ground. He suffered injuries that were described as major.

Responders transported the man to the hospital. His condition was described as critical.

His name and age not been reported.

According to Officer Railsback, the horse had injuries that were described as minor. An officer walked the horse back to the owner’s residence.

The person who was driving the vehicle stayed at the scene of the crash and cooperated with the investigation.

The driver was identified only as a resident of Riverside, 44 years old. Her name has not been reported.

Investigators are continuing to collect details and information about the crash.

Hire an Accident Attorney in Riverside

If you or a loved one has been injured in an auto collision, Accident Lawyer strongly encourages you to call our Riverside car accident lawyers. Your experienced Car Accident Lawyer Riverside will provide you with the best legal representation and guidance that you need. Our offices are conveniently located throughout California and we conduct regular travels in the region to meet with clients. Contact Car Accident Lawyer today.