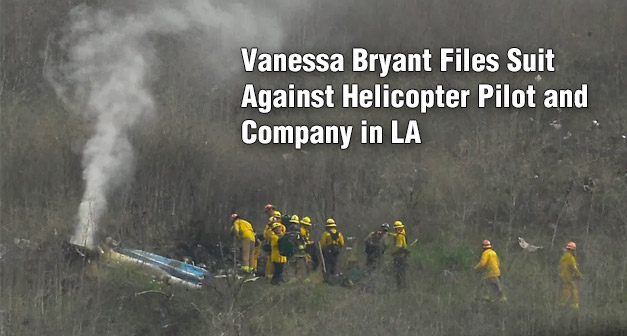 Los Angeles, CA – Vanessa Bryant, the widow of deceased Los Angeles Lakers legend Kobe Bryant, had filed a lawsuit Monday against the owner of the helicopter which killed her husband and their 13-year old daughter, Gianna Bryant, last month. The wrongful death lawsuit, filed by Vanessa Bryant in Los Angeles Superior Court, alleges negligence and carelessness by the pilot by flying in low visibility and cloudy conditions on January 26th and should have canceled the flight that subsequently killed 9 people including the Bryants.

The lawsuit named Island Express Helicopters Inc. as well as Ara Zobayan’s legal representative or successor as defendants. According to court documents, Mrs. Bryant asserts 8 negligent failings by Zobayan including not properly assessing weather conditions, flying into fog where he was not cleared, and failing to control the helicopter. The lawsuit was filed Monday morning as a large public memorial service came underway to celebrate the NBA All Star Kobe Bryant, his daughter Gianna, and all the victims of the crash including Zobayan. The ceremony was a sold-out affair with thousands crowding the area along Figueroa Street where the Staples Center is located. The ceremony was opened with Late Night host Jimmy Kimmel reading the names of the victims and encouraging donations to goFundMe accounts set up by victims’ families.

Zobayan had flown Mr. Bryant on a number of previous flights throughout the years. On the morning of January 26th Mr. Bryant, Gianna, and 6 of their friends were to depart from John Wayne Airport in Santa Ana headed to a basketball tournament at his Mamba Sports Academy when the helicopter crashed. Zobayan tried to navigate through heavy fog with limited visibility. The Los Angeles Police and Sheriff’s departments had issued an emergency order to ground their helicopter fleets in response to the thick fog.  Zobayan had been cited by the Federal Aviation Administration (FAA) back in May of 2015 for violations of visual flight rules that required Zobayan to be able to see where he was going.

The violations seemed to parallel the flight that eventually killed all onboard.  The last transmission between air traffic control and the helicopter was from Zabayan telling air traffic controllers that he was climbing to 4,000 feet in order to break through the clouds. Zabayan was only 100 feet away from reaching the break in clouds when the helicopter banked and plunged into a hillside in Calabasas.  Island Express, the company which the helicopter was owned by, has had at least 3 helicpter crashes since 1985 with 2 being fatal in nature according to the NTSB’s internal database.