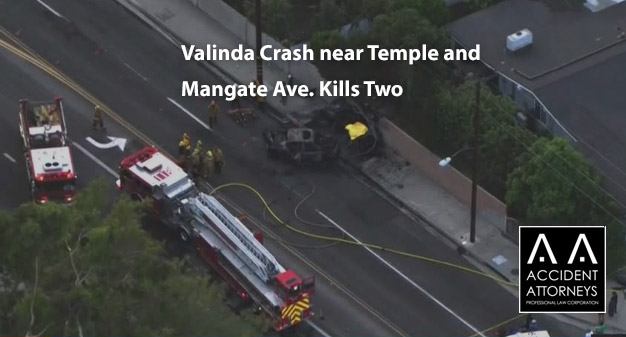 VALINDA, CA (September 7, 2022) – Late in the afternoon on Sunday in Valinda, two cars collided, killing two people. The September 4 crash occurred in the vicinity of Mangate Avenue and Temple Avenue.

The time was roughly 5:45 p.m., according to the California Highway Patrol.

Authorities said one car had been eastbound and another car had been westbound when, for reasons that are not known, the two vehicles collided.

A sergeant with the California Highway Patrol said both cars caught on fire.

Residents in the area came to the aid of the crash victims, reports say, and Good Samaritans pulled victims out of the crashed vehicles before responders came on site.

The person who was driving the eastbound car died at the crash site. The identity of the person has not been reported.

Responders worked to free four occupants from the westbound vehicle. They took the patients to Pomona Valley Medical Center.

The patients suffered injuries described as moderate to major, authorities said. One of the passengers that was transported died in the the hospital from her injuries.

She was identified only as 50 years old. Her name and city of residence have not been reported.

No one involved in the crash has been identified by name.

Investigators are continuing their work on the crash details.

Hire an Accident Attorney in Valinda

If you or a loved one has been injured in an auto collision, Accident Lawyer strongly encourages you to call our Valinda car accident lawyers. Your experienced Car Accident Lawyer Valinda will provide you with the best legal representation and guidance that you need. Our offices are conveniently located throughout California and we conduct regular travels in the region to meet with clients. Contact Car Accident Lawyer today.