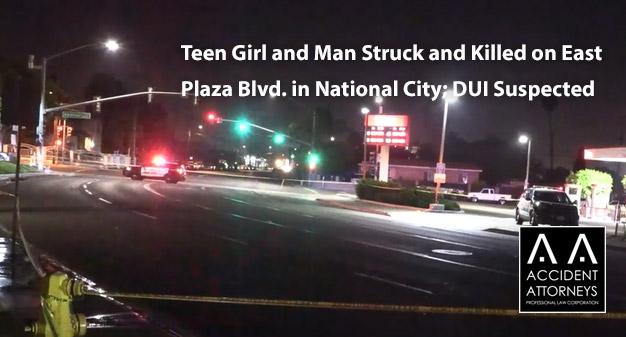 NATIONAL CITY, CA (June 23, 2022) – Late at night on Wednesday in National City, a vehicle struck and killed two pedestrians. The June 22 crash occurred on East Plaza Boulevard in the 3100 block.

The time was roughly 10:20 p.m., Joseph Camacho said. Camacho is a sergeant with National City Police.

No details have been reported on how the crash happened, but according to reports, the vehicle was a Toyota sedan.

Responders arrived at the crash site and found the two pedestrians who were struck–a teen girl and a man–down on the roadway.

The teen girl died at the crash site. Her name, age, and city of residence have not been reported.

Responders transported the man to Scripps Mercy Hospital where he was pronounced deceased.

The man’s identity, including his name, age, and city of residence, has also not been reported.

Authorities arrested the driver on suspicion of DUI. Her identity is not known.