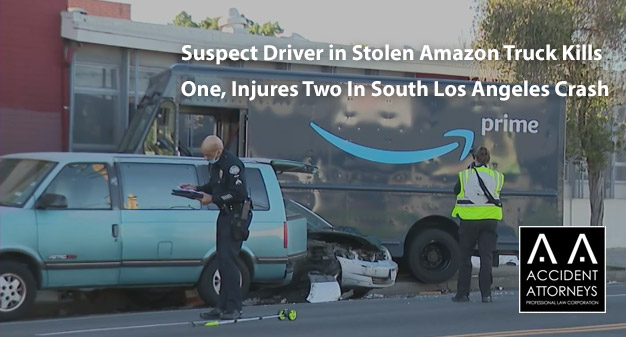 LOS ANGELES, CA (February 18, 2022) – Early in the afternoon on Thursday in South Los Angeles, a driver in a stolen Amazon truck crashed onto a sidewalk, killing one person and injuring two. The February 17 crash occurred close to where Main Street and 48th Street intersect.

According to reports, the driver who is suspected in the crash is alleged to have stolen the Amazon truck while a delivery was being made in the area of 41st Place and Woodlawn Avenue.

Authorities said the suspect lost control of the truck, and struck a number of vehicles that were parked. The vehicles have not been described.

The delivery truck hit three people who were on the sidewalk, according to police, pinning one person against a building.

One of the victims died at the crash site. He was identified only as 57 years old. His name and city of residence have not been reported.

Reports say he was a food vendor.

Two other victims suffered injuries that were described as minor. Their identities have not been reported.

The suspect is alleged to have fled the crash site on foot, but a person who witnessed the incident reported the fleeing suspect to authorities, according to Juan Campos, who is a detective with Los Angeles Police.

Authorities found and arrested the suspect, who was identified only as 37 years old; his name has not been reported.

Investigators are continuing work on the crash.