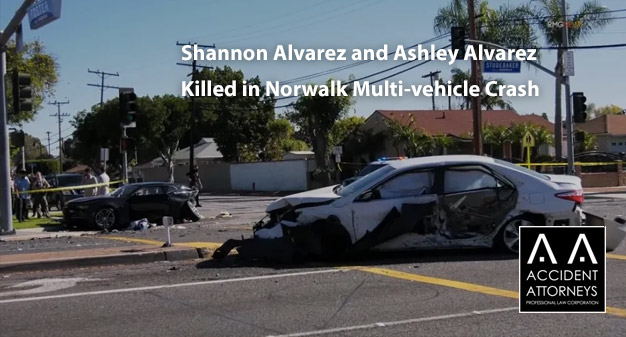 NORWALK, CA (January 4, 2022) – Late in the morning on Sunday in Norwalk, a multi-vehicle crash killed a mother and her teenaged daughter. The two victims of the January 2 crash were identified as Shannon Alvarez, 50 years old, and daughter Ashley Alvarez, 13 years old.

The crash happened where Studebaker Road and Foster Road intersect.

The time was roughly 10:00 a.m., according to the Los Angeles County Sheriff’s Department.

The Alvarezes had been traveling in a Chevrolet Camaro. A vehicle–described as a Dodge Charger–is alleged to have gone through a light that was red at a fast speed.

The Charger struck the Camaro, reports say. Shannon and Ashley Alvarez died from their injuries.

The person who was driving the Charger was arrested and charged with driving without a license and vehicular manslaughter. She was identified as Brittany Lopez, 26 years old. Authorities are waiting on results to determine if impairment was a factor.

Reports say Lopez suffered injuries that were described as minor in the crash.

Another person who was injured in the crash suffered injuries described as minor. The person’s identity has not been reported.

Hire an Accident Attorney in Norwalk

If you or a loved one has been injured in an auto collision, Accident Lawyer strongly encourages you to call our Norwalk car accident lawyers. Your experienced Car Accident Lawyer Norwalk will provide you with the best legal representation and guidance that you need. Our offices are conveniently located throughout California and we conduct regular travels in the region to meet with clients. Contact Car Accident Lawyer today.