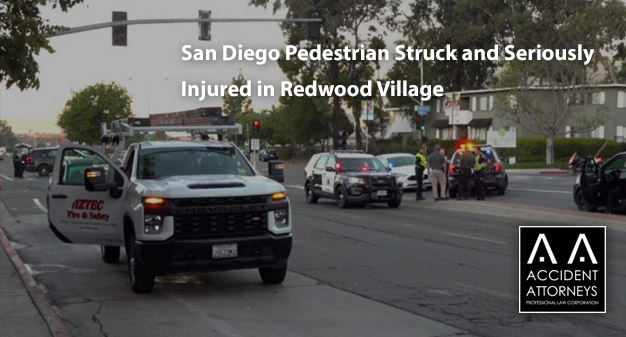 SAN DIEGO, CA (October 19, 2022) – Early in the morning on Tuesday in San Diego’s Redwood Village, a pedestrian was struck and seriously injured. The October 18 crash occurred on University Avenue.

The time was roughly a little after 7:00 a.m., San Diego Police said.

The pedestrian was walking across University Avenue, reports say, within a crosswalk that is marked. A vehicle–described as a Chevrolet Silverado–which had been traveling on 58th Street and going southbound, struck the pedestrian.

Responders transported the victim to the hospital. He suffered injuries that were described as life threatening, including injuries to his brain, lung, pelvis, hip, and leg.

His current condition is not known.

He was identified only as 28 years old. His name has not been reported.

The Chevrolet’s driver stayed at the crash site and called for help, reports say.

The driver was identified as 31 years old. His name has also not been reported.

To understand why the crash happened, investigators are continuing their work to collect details and information.