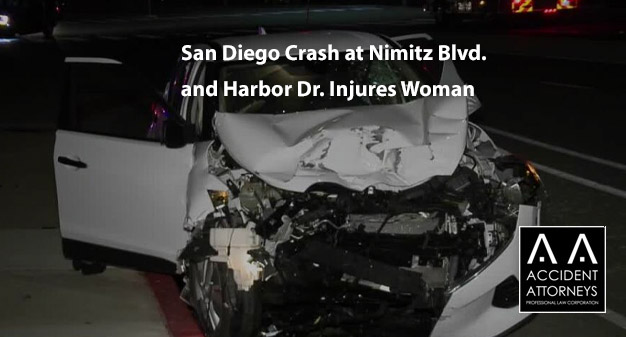 Authorities suspect a vehicle–which has not been described–had been traveling on Harbor Drive and heading west at a fast speed.

A vehicle–described only as an SUV–had been traveling on Nimitz Boulevard and heading south.

The SUV tried to make a turn to the left to Harbor Drive, and the two vehicles collided.

Investigators suspect one of the drivers did not stop for a light that was red.

Responders found that the driver who was in the vehicle that had been traveling on Harbor Drive was not using a seatbelt at the time of the crash.

The driver suffered injuries to her head and ankle. Responders transported her to UC San Diego Medical Center.

Her current condition is not known. She was identified only as 32 years old. Her name and city of residence have not been reported.

The person who was driving the SUV was not transported to a hospital as he did not appear to be injured, according to reports.

He was identified only as 32 years old. His name and city of residence are not known from reports.

Investigators are working to understand the crash, and they are presently collecting information.