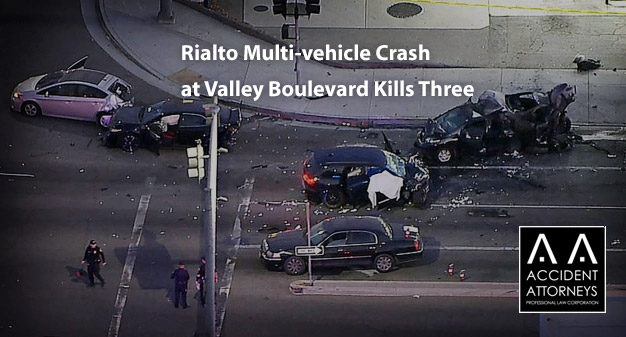 RIALTO, CA (August 2, 2022) – Early in the evening in Monday in Rialto, a multi-vehicle crash killed three people and injured others. The August 1 crash occurred where Valley Boulevard and Riverside Avenue intersect.

Eight vehicles were reported to have collided.

The initial sequence involved a Jeep Cherokee that was traveling at a fast speed. It struck the rear end of two vehicles, according to investigators.

The two vehicles that were struck at the intersection crashed into a number of other vehicles.

Two of the vehicles involved in the crash caught fire.

Responders pronounced three people deceased at the crash site. The identities of the people have not been reported.

Reports say one of the deceased may have been the person who was driving the Jeep.

Responders transported two other people to hospitals in the area. The patients suffered injuries that were described as moderate.

No one involved in the crash has been identified. The other vehicles have not been described.

Investigators are currently working to gather information about the crash.

If anyone has information about the incident, the person can call Rialto Police.

Hire an Accident Attorney in Rialto

If you or a loved one has been injured in an auto collision, Accident Lawyer strongly encourages you to call our Rialto car accident lawyers. Your experienced Car Accident Lawyer Rialto will provide you with the best legal representation and guidance that you need. Our offices are conveniently located throughout California and we conduct regular travels in the region to meet with clients. Contact Car Accident Lawyer today.