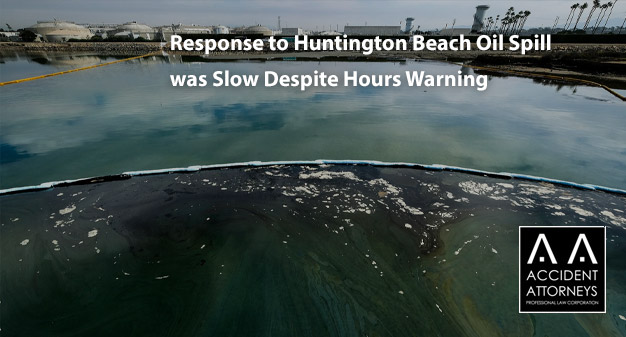 HUNTINGTON BEACH, CA (October 6, 2021) – Investigators have released some of their early findings regarding the leaking pipeline that has released up to 144,000 gallons of crude oil into the Pacific Ocean on the Southern California coast. They are reported to have discovered that an alarm was warning operators at the Elly rig–located roughly 4 1/2 miles offshore–at 2:30 a.m. on Saturday. Yet the leaking pipeline was not shut down for more than three hours, at 6:01 a.m.

Reports say Amplify Energy–the company that owns the pipeline–waited for three additional hours before telling the U.S. Coast Guard’s National Response Center about the oil spill. The slow response to shut the pipeline and contain the spill likely has made the situation worse, according to experts.

However, reports also say the state received reports from the public of a possible leak on Friday night, at 8:22 p.m., according to a document from the California Governor’s Office of Emergency Services. Reports say a person saw a sheen on the surface of the water, and reported it.

The Coast Guard did not send personnel to fly over to inspect the situation until the next morning, according to reports.

Investigators are working to understand the oil spill, and the response.

Early findings show that the pipeline was displaced by more than 100 feet on the floor of the ocean, and was damaged. Early speculation by some indicates the pipeline may have been dragged by an anchor from a ship.