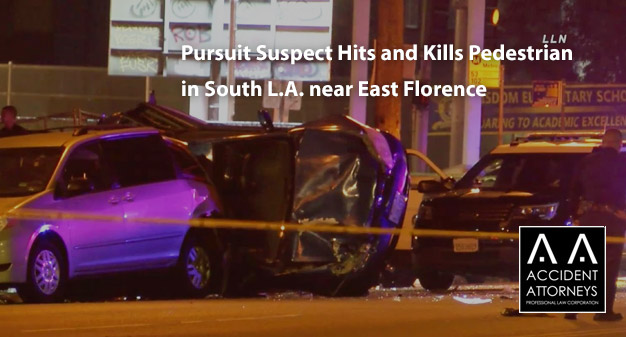 LOS ANGELES, CA (June 16, 2022) – Early in the morning on Thursday in South Los Angeles, a driver fleeing police pursuit struck and killed a pedestrian. The June 16 crash occurred close to where South Central Avenue and East Florence Avenue intersect in the Florence neighborhood.

Reports say police were pursuing a driver who was in a suspected stolen vehicle. The driver is alleged to have been driving at a fast speed when the pedestrian was hit.

Responders arrived and pronounced the victim deceased at the crash site. He was identified only as a man in his fifties.

His name and city of residence have not been reported.

The impact of the crash sent the vehicle–which has not been described–to roll over.

Responders transported the suspect driver to a hospital. She suffered injuries described as not life threatening.

She was identified only as 30 years old. Her name and city of residence are not known from reports.