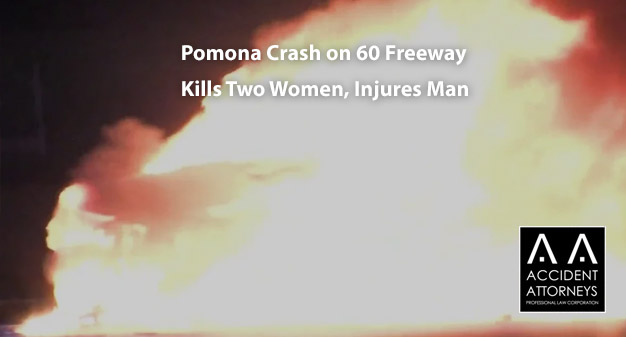 POMONA, CA (April 18, 2022) – Early in the morning on Sunday in Pomona, a crash involving two vehicles killed two women and injured a man on the 60 Freeway. The April 17 crash occurred on the eastbound side of the freeway, near Reservoir Street and to the west of it.

The time was roughly 2:05 a.m., according to the California Highway Patrol.

A vehicle–described as a Honda Civic–struck the rear end of a Toyota Camry. The Toyota was stopped on the freeway because of a prior crash, which had occurred ahead of it.

Responders found the woman who was driving the Honda died at the crash site. She has not been identified.

A person who had been traveling as a passenger in the Toyota was killed in the crash. She was identified only as a resident of Chino, 23 years old. Her name has not been reported.

Responders took the person who was driving the Toyota to Pomona Valley Hospital Medical Center. He suffered injuries that were described as minor.

He was identified only as a resident of Chino, 24 years old. His name is not known from reports.

Investigators are continuing their work to collect information and details. If anyone has information about the crash, the person can contact the Baldwin Park area office of the California Highway Patrol.

Hire an Accident Attorney in Pomona

If you or a loved one has been injured in an auto collision, Accident Lawyer strongly encourages you to call our Pomona car accident lawyers. Your experienced Car Accident Lawyer Pomona will provide you with the best legal representation and guidance that you need. Our offices are conveniently located throughout California and we conduct regular travels in the region to meet with clients. Contact Car Accident Lawyer today.