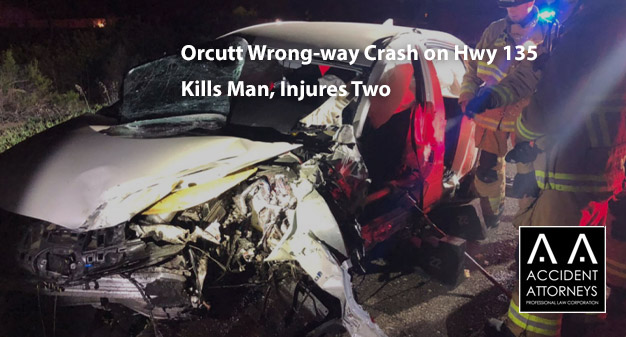 ORCUTT, CA (March 10, 2022) – On Friday night in Orcutt, a wrong-way crash killed a man and caused two other people to suffer major injuries. The March 4 crash occurred on Highway 135, near Union Valley Parkway and to the south of it.

The time was roughly 8:59 a.m., the California Highway Patrol said.

Responders from Santa Barbara County Fire arrived, and pronounced the suspected wrong-way driver deceased at the crash site. He was later identified as Jorge Valera Rodriguez, a resident of Guadalupe, 20 years old.

The passenger in the vehicle with Valera Rodriguez suffered injuries that were described as major. He was identified only as 21 years old. His name and city of residence have not been reported.

The person who was driving the other vehicle also suffered injuries that were described as major. He was identified only as a resident of Lompoc, 31 years old. His name has not been reported.

The current conditions of the two patients are not known.

Hire an Accident Attorney in Orcutt

If you or a loved one has been injured in an auto collision, Accident Lawyer strongly encourages you to call our Orcutt car accident lawyers. Your experienced Car Accident Lawyer Orcutt will provide you with the best legal representation and guidance that you need. Our offices are conveniently located throughout California and we conduct regular travels in the region to meet with clients. Contact Car Accident Lawyer today.