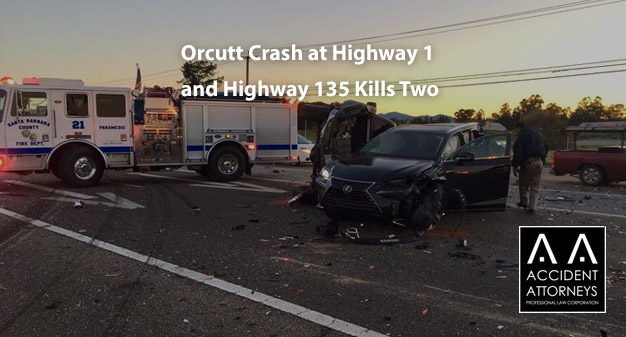 ORCUTT, CA (July 5, 2022) – Late at night on Saturday near Orcutt, three vehicles were involved in a collision; two people were killed. The July 2 crash occurred where Highway 135 and Highway 1 intersect.

The time was roughly 10:13 p.m., the California Highway Patrol said.

Authorities allege a vehicle–described as a Honda Civic–had been going at a fast speed on Highway 1 and heading north.

The Honda rear-ended a vehicle–described as a Nissan Sentra–according to authorities.

The force of the crash sent the Honda to overturn, and land in the median.

The driver exited the Honda, walked to the lanes on the southbound side of the roadway, and an oncoming vehicle–described as a GMC Yukon–struck him.

Responders found a passenger who was traveling in the Nissan was killed in the crash. She was identified only as a resident of Santa Maria, 18 years old.

The Nissan’s driver suffered injuries that were described as minor. She was identified as a resident of Nipomo, 19 years old.

The man who had been driving the Honda was killed. He was identified as a resident of Santa Maria, 41 years old.

The person who was driving the GMC was identified as a resident of Lompoc, 49 years old.

None of the names of the people involved in the crash have been reported.

Investigators are continuing to collect details and information to understand the crash.

Hire an Accident Attorney in Orcutt

If you or a loved one has been injured in an auto collision, Accident Lawyer strongly encourages you to call our Orcutt car accident lawyers. Your experienced Car Accident Lawyer Orcutt will provide you with the best legal representation and guidance that you need. Our offices are conveniently located throughout California and we conduct regular travels in the region to meet with clients. Contact Car Accident Lawyer today.