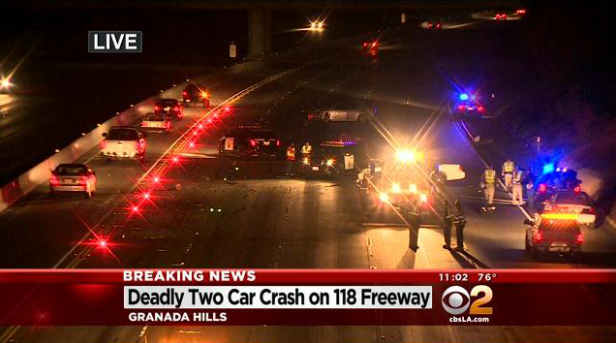 One person is dead after a two-vehicle crash in Granada Hills Thursday, said police officials.

The crash was reported just after 9 p.m. and happened on the westbound 118 Freeway at Balboa Boulevard. All westbound lanes had been closed, according to the California Highway Patrol.

According to Stu Mundel of Sky9, one of the vehicles was rear-ended and caught fire in the collision.

The occupant reported dead was in that car, according to Mundel. An unknown number of people were injured and transported to hospitals, he said. The condition of those injured was not immediately available.

One lane was reopened by California Highway Patrol by 10 p.m. as their investigation continued. By 11 p.m., officers were having cars exit at Balboa. Cars directly behind the accident were stuck for nearly two hours.