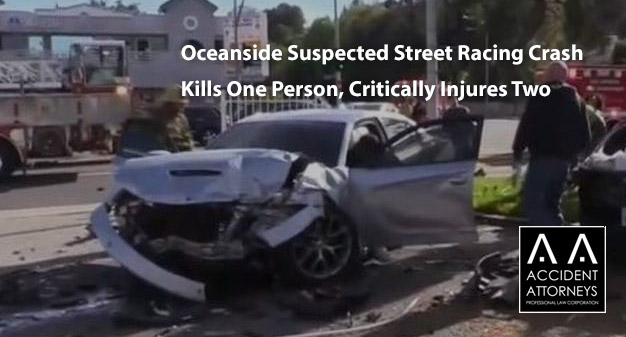 OCEANSIDE, CA (September 13, 2021) – Early on Friday night in Oceanside, a crash in which street racing may have been involved killed a man and critically injured two people. The September 10 crash occurred on Mesa Drive in the 4300 block.

The time was roughly 7:40 p.m., Rick Davis said. Davis is a sergeant with Oceanside Police.

A vehicle–described as a Dodge Charger–had been traveling west at a fast speed on Mesa Drive, according to witnesses and physical evidence from the crash site, according to Davis.

The Dodge went out of the driver’s control, traveled into the lane of opposing traffic, and collided with a vehicle–described as a Mini Cooper. The Dodge rolled over and over and plunged down a slope, going down roughly 350 feet.

According to Davis, the driver of the Dodge may have been racing a vehicle described only as silver in color. The other car left the crash scene.

Responders arrived and pronounced the driver of the Dodge deceased at the crash site. He was identified only as 27 years old. His name and city of residence have not been reported.

Two people who had been traveling in the Mini Cooper were outside of the car when responders arrived. Both people suffered injuries that were described as critical.

Responders airlifted the two people to the hospital for treatment. Their current condition is not known. They have not been identified in reports.

Investigators are continuing their work to collect details regarding the crash. If anyone has information about the incident, the person can contact Clint Bussey, who is an accident investigator. The number is 760-435-4412.

If you or a loved one has been injured in an auto collision, the AA Accident Attorney strongly encourages you to call our Oceanside car accident lawyers. Your experienced Car Accident Lawyer Oceanside will provide you with the best legal representation and guidance that you need. Our offices are conveniently located throughout California and we conduct regular travels in the region to meet with clients. Contact Car Accident Lawyer today.