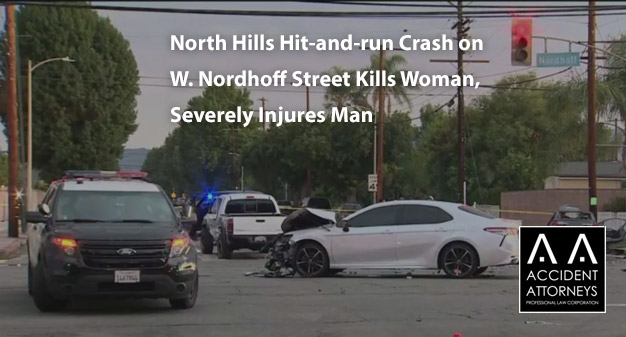 LOS ANGELES, CA (October 5, 2021) – Early in the morning on Tuesday, a hit-and-run crash involving four vehicles killed a woman and severely injured a man. The October 5 crash occurred in the area of North Hills, located in the San Fernando Valley.

The time was roughly 5:30 a.m., according to the Los Angeles Fire Department.

Four vehicles collided, reports say, but the line of travel of each vehicle, and the sequence in which each vehicle was involved in the crash, has not been described.

Only one vehicle involved in the crash was described. It was an SUV, black in color.

Responders from the Los Angeles Fire Department worked to free two people from the wreckage of a vehicle. A woman who had been in the vehicle died at the crash site.

Her identity, including name, age, and city of residence, has not been reported.

Responders transported a man from the vehicle to the hospital His condition was described as critical. His identity has also not been reported.

None of the other people involved in the crash have been identified. It is not known from reports if anyone else was hurt in the collision.

According to Los Angeles Police, two people who had been traveling in the SUV fled the scene on foot.

Investigators are working to locate the two suspects who ran from the crash site. They are continuing to collect details and information to understand the crash.

If you or a loved one has been injured in an auto collision, AA Accident Attorney strongly encourages you to call our Los Angeles car accident lawyers. Your experienced Car Accident Lawyer Los Angeles will provide you with the best legal representation and guidance that you need. Our offices are conveniently located throughout California and we conduct regular travels in the region to meet with clients. Contact Car Accident Lawyer today.