Nine-vehicle Santa Monica Crash on the 10 Freeway Kills One, Injures Others 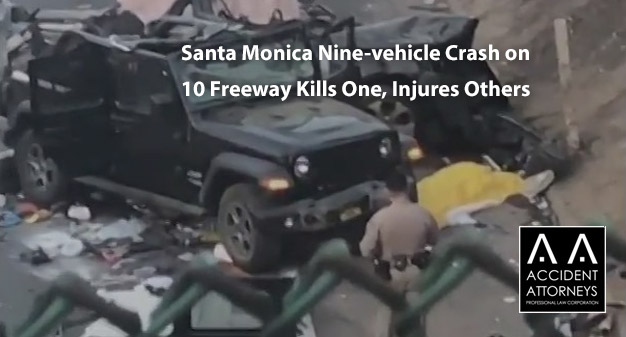 Nine-vehicle Crash on the 10 Freeway in Santa Monica Kills One, Injures Others

SANTA MONICA, CA (August 16, 2021) – Late in the afternoon on Saturday in Santa Monica, nine vehicles collided on the 10 Freeway, killing one person, and injuring others. The August 14 crash occurred on the eastbound side of the freeway, close to where the overpass for Lincoln Boulevard is located.

Reports say nine vehicles collided, and one vehicle had rolled over in the crash. None of the vehicles have been described.

The manner in which the crash occurred, and the sequence in which each vehicle crashed, has also not been described.

Responders found one person died at the crash site. The person’s identity has not been reported.

One person suffered serious injuries; the person’s condition was described as critical. The identity of the patient has not been reported.

Two people suffered injuries that were described as minor. Their identities have also not been reported.

Investigators are working to understand why the crash happened, and they are continuing to collect information and details.

If you or a loved one has been injured in an auto collision, the AA Accident Attorney strongly encourages you to call our Santa Monica car accident lawyers. Your experienced Car Accident Lawyer Santa Monica will provide you with the best legal representation and guidance that you need. Our offices are conveniently located throughout California and we conduct regular travels in the region to meet with clients. Contact Car Accident Lawyer today.