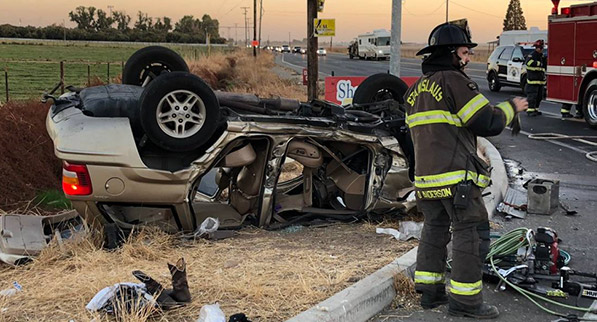 Modesto, CA (October 14, 2018) – California Highway Patrol investigated a two-vehicle crash at Milnes and Albers roads that injured several and also involved a man facing charges of DUI Sunday, October 14th. The incident occurred in the afternoon shortly before 6 p.m. when a 58-year-old driver of a Ford Expedition, identified as Karol Gene Adams of Ceres, was traveling southbound on Albers Road, and ran the red light at the Milnes intersection.

According to CHP, 48-year-old Oscar Manuel Cota Bacasehua of Fontana was driving a 1999 Jeep SUV eastbound on Milnes at the same time Adams ran the red. Adams’ vehicle T-boned the driver’s side of the Jeep, which spun out of control and flipped over onto its roof, according to CHP incident logs. Ambulances were called to the scene and both drivers were transported to local hospitals. Bacasehua’s two passengers were in unknown condition undisclosed by officials. Although Bacasehua was not the driver at fault, he was later arrested on charges of DUI, showing signs of intoxication at the scene of the impact.

Find A Modesto Car Accident Lawyer Near You