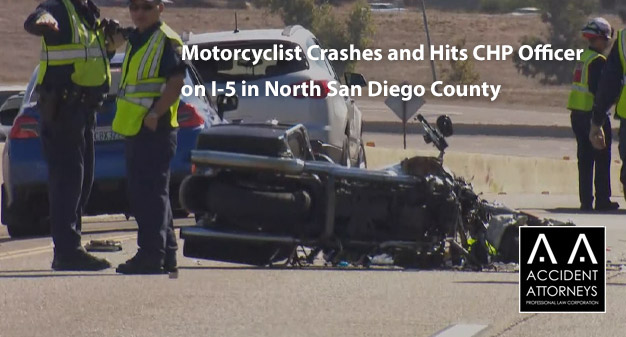 SAN DIEGO COUNTY, CA (September 1, 2021) – Late in the afternoon on Tuesday in north San Diego County, a motorcyclist crashed and hit a CHP officer who was outside his vehicle. Both people were injured in the August 31 crash, which occurred on I-5, close to Lomas Santa Fe Drive and to the south of it.

The time was roughly 4:20 p.m., the California Highway Patrol said.

The California Highway Patrol officer was walking back to his patrol vehicle after removing a ladder that was lying in the roadway. While he walking, according to reports, a motorcycle struck the wall of the center divider, and the impact threw the rider from the motorcycle.

The motorcyclist and the officer were injured in the crash.

Responders arrived and transported both patients to the hospital for treatment.

The officer suffered injuries that were described as minor to moderate. His current condition is not known. His identity has not been reported.

The motorcyclist suffered injuries that were described as major. The rider was identified only as 61 years old. The name, gender, and city of residence of the rider have not been reported.

Investigators are working on the crash details. If anyone has information about the crash, the person can contact authorities. The number is 760-643-3400.

If you or a loved one has been injured in an auto collision, the AA Accident Attorney strongly encourages you to call our San Diego County car accident lawyers. Your experienced Car Accident Lawyer San Diego County will provide you with the best legal representation and guidance that you need. Our offices are conveniently located throughout California and we conduct regular travels in the region to meet with clients. Contact Car Accident Lawyer today.