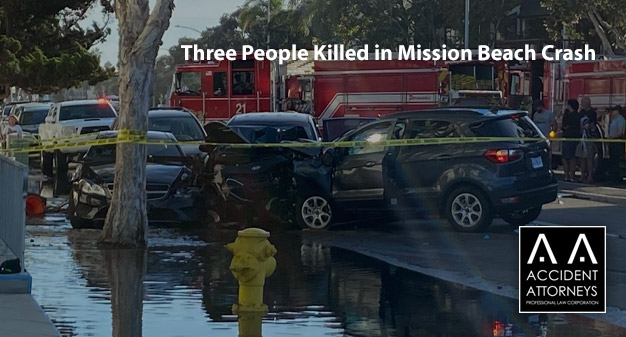 SAN DIEGO, CA (November 2, 2022) – Three people were killed in a head-on crash on Saturday near Mission Beach. The people who died were identified by the San Diego County Medical Examiner’s Office as Mary Small, Andrew Small, and Suzanne Thompson.

The October 29 crash occurred on Mission Avenue in the 2900 block.

Mary and Andrew Small–husband and wife–were traveling on Mission Avenue in a Ford SUV, with Andrew Small driving, according to authorities.

Authorities said the Ford was heading south in the lanes that travel north, and that Andrew Small was slumped in the driver’s seat as the vehicle was moving at a fast speed.

A vehicle–described as a Kia SUV–was heading north in the northbound lane, and reports say the Kia’s driver saw the oncoming Ford.

The Kia’s driver decelerated to try to avert the head-on crash, reports say.

Responders pronounced Andrew Small deceased at the crash site. He was a resident of San Diego, 62 years old.

Responders took Mary Small–who had been traveling in the passenger front seat–to Scripps Memorial Hospital. She died on Monday.

Suzanne Thompson, who had been traveling in the Kia as a passenger, was killed in the collision.

She was a resident of Nevada, 59 years old.

Investigators are working on the crash details, and they are continuing to collect information.