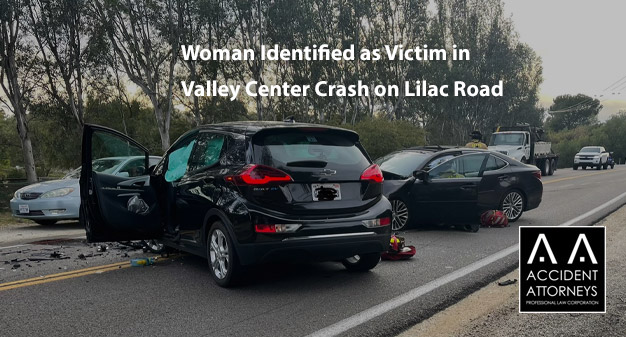 VALLEY CENTER, CA (March 21, 2022) – Mary Plounts was identified by authorities as the person who was killed in a head-on crash last week in Valley Center. The March 15 crash occurred on Lilac Road.

The time was roughly 5:50 p.m., the California Highway Patrol said.

A vehicle–described as a Lexus ES 350–had been going east on Lilac Road. For reasons that are not known, the Lexus crossed into the lane of opposing traffic, and collided with a Chevrolet Bolt.

Responders transported the two occupants of the Chevrolet, and the occupant of the Lexus to the hospital.

A woman who had been traveling in the Chevrolet died from the injuries she suffered.

She was later identified as Mary Plounts, a resident of Valley Center, 78 years old.

The man who had been driving the Chevrolet suffered injuries that were described as major. He was identified as a resident of Valley Center, 73 years old. His name has not been reported.

The man who had been driving the Lexus also suffered injuries that were described as major. He was identified as a resident of Valley Center, 62 years old. His name has also not been reported.

Investigators are continuing their work. If anyone has information about the crash, the person can call the Oceanside Area office for the California Highway Patrol.