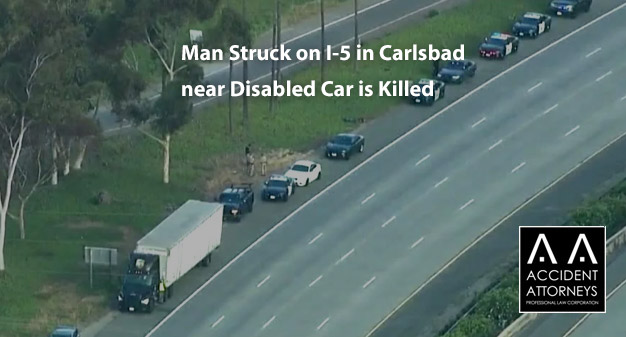 CARLSBAD, CA (April 29, 2022) – Late at night on Wednesday in Carlsbad, a driver who authorities suspect of DUI struck and killed a man who was standing near a disabled vehicle. The April 27 crash occurred on I-5 on the southbound side of the freeway, near Cannon Road.

The time was roughly 11:17 p.m., Hunter Gerber said. Gerber is an officer with the California Highway Patrol.

Reports say the victim had been near his vehicle–described as a Ford Explorer–which was disabled on the right shoulder of the freeway. A Honda Accord–which had been traveling in the fourth lane–went out of the lane and onto the shoulder.

The Honda struck the Ford, authorities said, hitting the back end. The impact sent the Ford to hit the man standing near it.

Responders found the man who had been standing by his vehicle was killed in the crash. He was identified only as a resident of Sun City, 65 years old.

His name has not been reported.

Authorities arrested the driver on suspicion of gross vehicular manslaughter while intoxicated and DUI. He was identified as Douglas Payne, a resident of Carlsbad, 51 years old.

Investigators are continuing to work on the crash. If anyone has information about the crash, the person can call the California Highway Patrol.

Hire an Accident Attorney in Carlsbad

If you or a loved one has been injured in an auto collision, Accident Lawyer strongly encourages you to call our Carlsbad car accident lawyers. Your experienced Car Accident Lawyer Carlsbad will provide you with the best legal representation and guidance that you need. Our offices are conveniently located throughout California and we conduct regular travels in the region to meet with clients. Contact Car Accident Lawyer today.