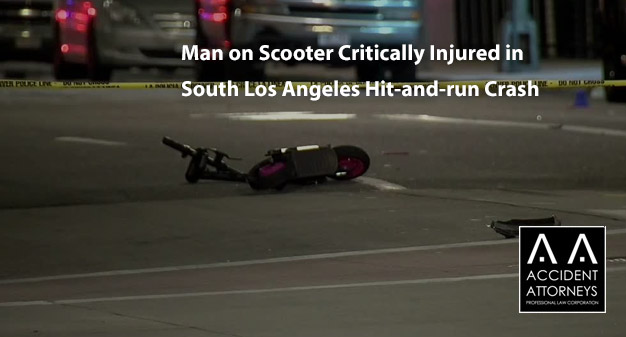 SOUTH LOS ANGELES, CA (October 15, 2021) – Late in the morning on Thursday in South Los Angeles, a man who was riding a scooter was struck and critically injured by a hit-and-run driver. The October 14 crash occurred in the Central-Alameda area, where Hooper Avenue and 48th Place intersect.

The man on the scooter had been traveling northbound on Hooper Avenue, according to police. A vehicle–described as a Honda Civic–made a left turn to 48th Place that police described as “unsafe” in a report.

The scooter and the Honda collided, and the impact threw the rider from the scooter. According to police, the person who had been driving the Honda stopped for a moment, and left the crash site. The driver did not help the victim.

Responders from the Los Angeles Fire Department transported the patient to a hospital in the area. He suffered injuries that were described as critical.

He was identified only as 55 years old. His name and city of residence have not been reported.

Investigators are searching for the vehicle involved in the crash, described as a Honda Civic with chrome tires, tinted windows, and a rear spoiler. According to police, the vehicle did not have a license plate in the front.

Investigators are also searching for the suspect hit-and-run driver, who was described as a woman with red hair. No other details about the driver have been reported.

If anyone has information about the crash, the person can call Calvin DeHesa, who is a detective. The number is 213-833-3713.

If you or a loved one has been injured in an auto collision, the AA Accident Attorney strongly encourages you to call our South Los Angeles car accident lawyers. Your experienced Car Accident Lawyer South Los Angeles will provide you with the best legal representation and guidance that you need. Our offices are conveniently located throughout California and we conduct regular travels in the region to meet with clients. Contact Car Accident Lawyer today.