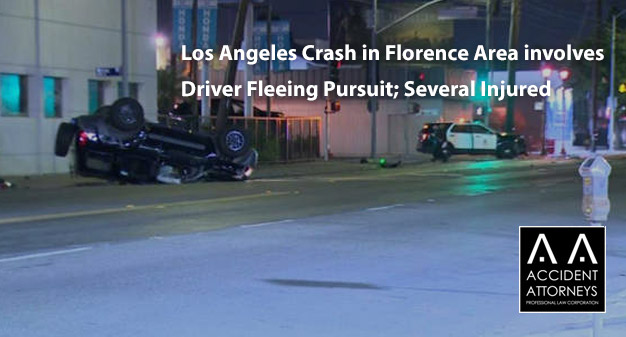 LOS ANGELES, CA (September 20, 2022) – On Monday afternoon in Los Angeles, a suspect who was fleeing pursuit collided with other vehicles. Several people were injured in the September 19 crash, which occurred close to where Main Street and 79th Street intersect in the Florence area.

A vehicle–which has not been described–was being pursued by authorities for reasons that have not been reported.

The vehicle that was being pursued collided with other vehicles.

The crash has not been described, and it is not known where the other vehicles were located, nor the line of travel of the vehicles when they collided.

Responders transported a patient to the hospital. The types of injuries he suffered, and current condition, are not known.

His identity was reported only as a man in his thirties; reports do not say if the patient was the suspect who was being pursued.

Two other people suffered injuries, but their conditions are also not known, and they have not been identified.

Investigators are continuing their work on the crash to understand what happened, and how it happened.