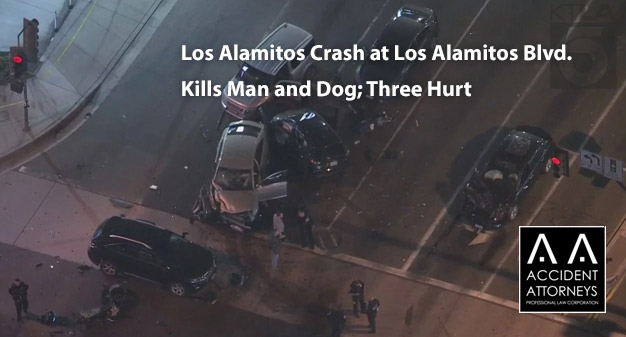 LOS ALAMITOS, CA (March 4, 2022) – Early in the evening on Wednesday in Los Alamitos, eight vehicles crashed, killing a man and a dog, and injuring three other people. The March 3 crash occurred where Los Alamitos Boulevard and Katella Avenue intersect.

The time was roughly 6:15 p.m., Robert Acosta said. Acosta is a spokesperson with Los Alamitos Police.

No details have been reported on how the eight vehicles collided, nor the sequence that involved each vehicle. The vehicles have not been described.

Responders arrived and found a man and a dog–who had been in the same vehicle–were killed in the crash.

The identity of the man, including his name, age, and city of residence, has not been reported.

The dog was described as a Labrador Retriever. The dog’s name has not been reported.

Responders worked to free two people from the wreckage. A third person was also injured, but reports say the person refused medical attention.

The three people who were injured have also not been identified. The types of injuries they suffered, and current conditions, are not known.

Investigators are working to understand the crash, and discover why it happened.