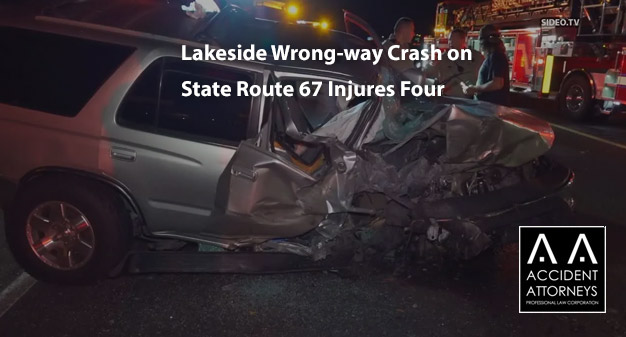 The time was roughly 11:25 p.m., according to Travis Garrow. Garrow is a public information officer with the California Highway Patrol.

According to authorities, a vehicle–described as a Toyota 4Runner–had been traveling on State Route 67 when the driver executed a U-turn in the Mapleview Street intersection.

The driver went into the lanes of opposing traffic, according to Garrow, traveling southbound in the lanes that head north.

The Toyota 4Runner collided head on with a northbound Toyota Highlander.

Responders transported the Highlander’s driver and a rear-seat passenger in the Highlander to Sharp Memorial Hospital. The two people suffered injuries that were described as minor to moderate.

Responders transported a passenger who had been in the Highlander’s front seat to Scripps Mercy Hospital. The person suffered injuries that were described as major.

The patient was identified only as 18 years old.

None of the victims’ names has been reported.

Responders took the person who had been driving the 4Runner to Sharp Memorial Hospital. The condition of the patient is not known.

The driver was identified only as 51 years old. His name and city of residence have not been reported.

Reports say the driver of the 4Runner is suspected of DUI.

If you or a loved one has been injured in an auto collision, Accident Lawyer strongly encourages you to call our Lakeside car accident lawyers. Your experienced Car Accident Lawyer Lakeside will provide you with the best legal representation and guidance that you need. Our offices are conveniently located throughout California and we conduct regular travels in the region to meet with clients. Contact Car Accident Lawyer today.