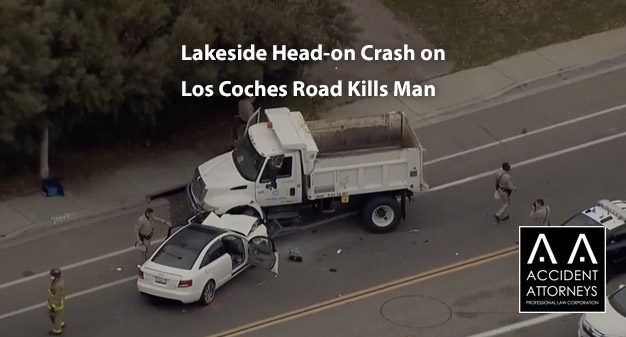 LAKESIDE CA (February 2, 2022) – Early in the afternoon on Tuesday near Lakeside, a head-on crash killed a man. The February 1 crash occurred in the area of Glenview, on Los Coches Road close to Lakeview Road.

The time was roughly a little after 2:00 p.m., the California Highway Patrol said.

A vehicle–described as an Audi A6–had been traveling on Los Coches Road and heading north. For reasons that are not known, the Audi went into the lane of opposing traffic, and into the path of an oncoming dump truck.

The Audi and the dump truck collided head on.

Responders transported the driver of the Audi to a hospital. He was pronounced deceased in the hospital, Travis Garrow said. Garrow is a public affairs officer with the California Highway Patrol.

The man was identified only as a resident of El Cajon, 56 years old. His name has not been reported.

Responders transported a passenger from the Audi to the hospital. The types of injuries she suffered are not known.

She was identified only as 42 years old. Her name and city of residence have not been reported.

The person who had been driving the dump truck was also taken to the hospital; his injuries are not known.

He was identified as a resident of San Diego, 60 years old. His name has also not been reported.

Investigators are working on understanding the crash.

If you or a loved one has been injured in an auto collision, Accident Lawyer strongly encourages you to call our Lakeside car accident lawyers. Your experienced Car Accident Lawyer Lakeside will provide you with the best legal representation and guidance that you need. Our offices are conveniently located throughout California and we conduct regular travels in the region to meet with clients. Contact Car Accident Lawyer today.