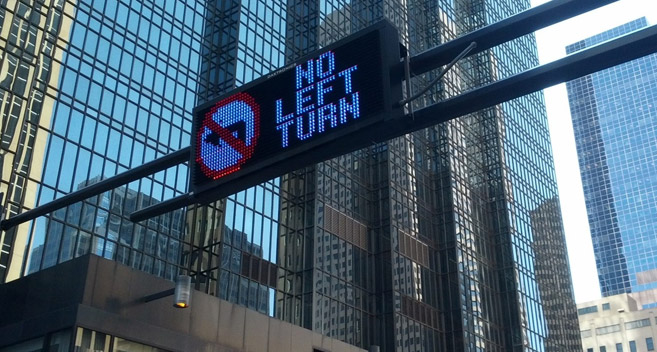 In the City of Los Angeles, it’s famously difficult to make left-hand turns at intersections. Find out why that’s the case; what the law says about making left turns at lights; and how you can ensure you’re safe and totally in line with the law. Read this post from a top car accident lawyer in Los Angeles.

If you’ve spent much time driving in Los Angeles, you know that it can be tough to get around. Part of it’s just because of all the traffic and congestion. But another big issue is making left turns at lights. Simply put, it can be very hard to pull a left-hand turn in the City of Los Angeles and attempting to do so is a good way to either get a ticket or wind up in an accident.

But why are left turns so tricky? What is it about the design of Los Angeles’ streets that make it such a burden?

The Problem with Left Turns in LA

There’s a simple reason for this: Most of the streets in LA were designed many decades ago, long before the population boom. They were designed to accommodate relatively small amounts of traffic. The City of Los Angeles has exploded, and its streets haven’t been updated to address this increase in population and in traffic.

The good news is that Los Angeles is currently embarking on its Vision Zero campaign to minimize traffic fatalities, and part of this effort is installing new lights with left turn signals. This is a welcome undertaking, but of course, it will be a matter of time before LA has the signals it really needs to make left hands safe and attainable.

What Does the Law Say About Left Turns in Los Angeles?

So that’s why it’s so hard to make left turns in LA. Now, for a different question: What does the law actually say about going left at green lights? Here’s a quick explanation from our top car accident lawyer in Los Angeles.

Basically, any time a light is red, your car needs to be stopped behind the white limit line. If you’re making a left turn as the light turns red, and you’ve already crossed that line, then you really have no choice but to complete the turn. All traffic must be cleared from the intersection.

But if the light turns red and you’re behind the limit line, and then you venture forward to try a left turn, it’s a traffic violation. You could get ticketed for it.

This law exists as a matter of public safety. In Los Angeles, red lights are one of the top three causes of automotive accidents.

For now, making a left turn in LA remains quite challenging. In fact, companies like UPS actually use their own proprietary GPS algorithms to help drivers get around town as efficiently as possible, without having to make any left turns!

Find A Los Angeles Car Accident Lawyer Near You!

The best guidance our Los Angeles accident lawyer can give is to be careful, and make sure you know what the law says about turning left at a traffic light. It can be a difficult thing to pull off, and you may be better off sticking to right turns. If you ever are involved in a car accident, for any reason, make sure you reach out to a qualified LA car accident lawyer in Los Angeles… someone who can represent your legal interests fully.