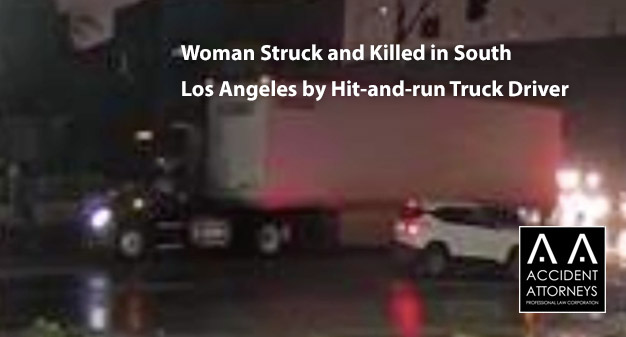 SOUTH LOS ANGELES, CA (October 28, 2021) – Early in the morning on Monday in South Los Angeles, a semi truck driver struck and killed a pedestrian, and the driver fled the crash site. The October 25 hit-and-run crash killed a woman who was later identified as Iquisha Blaxon.

The crash occurred on Grand Avenue close to Gage Avenue.

According to police, the big rig–described as a tractor-trailer–had been traveling on Grand Avenue and heading north. At Gage Avenue, the driver made a turn to the right, and struck the pedestrian.

The driver did not remain at the crash site or help the victim.

Responders arrived to help, but the victim died at the crash site. She was later identified as Iquisha Blaxon.

Investigators are asking for the public’s help to locate the hit-and-run truck driver. They have released a photo of the big rig.

If anyone has information about the incident, the person can call Detective Berdin, who is with the Central Traffic Detectives at the Los Angeles Police Department. The number is 213-833-3713.