House on Katella Ave. in Orange Damaged when Driver Smashes into It 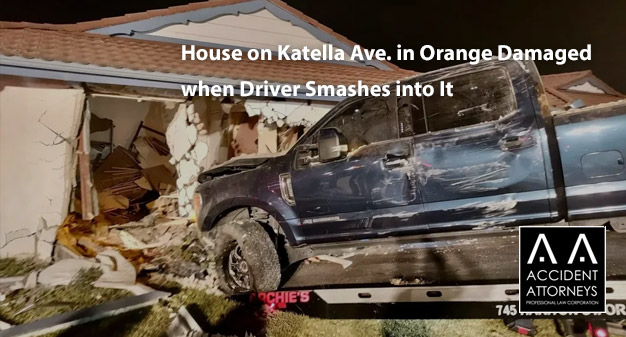 House on Katella Ave. in Orange Damaged when Driver Smashes into It

ORANGE, CA (June 7, 2022) – Late at night on Friday in Orange, a house was damaged to the extent that it was declared uninhabitable after a pickup truck smashed into it. The June 3 crash occurred on East Katella Avenue in the 2400 block.

A vehicle–described as a Ford F-250 pickup truck–was reported to have struck a vehicle that was parked in a sideswipe motion. The impact from the crash caused the tire on the passenger side in the front to come off the truck.

The pickup swerved off the roadway and smashed into a house, according to Phil McMullin. McMullin is a sergeant with Orange Police.

Responders transported the driver to the hospital. The person suffered injuries that were described as minor.

Authorities arrested the driver on suspicion of DUI. The person was identified only as a resident of Villa Park, 55 years old. The driver’s name has not been reported.

Reports say no one inside the residence was injured in the crash. Investigators declared the house uninhabitable and it was red-tagged due to the damage from the crash.

The owners of the residence have not been identified in reports.

Hire an Accident Attorney in Orange

If you or a loved one has been injured in an auto collision, Accident Lawyer strongly encourages you to call our Orange car accident lawyers. Your experienced Car Accident Lawyer Orange will provide you with the best legal representation and guidance that you need. Our offices are conveniently located throughout California and we conduct regular travels in the region to meet with clients. Contact Car Accident Lawyer today.