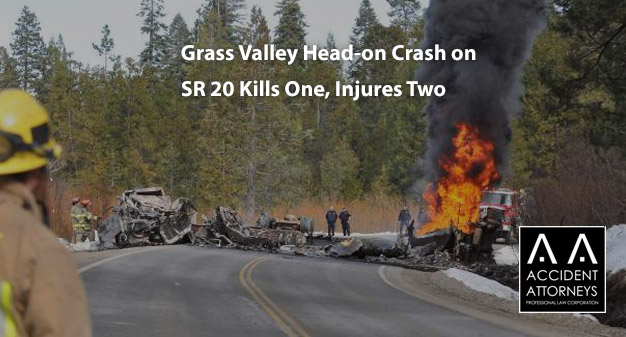 GRASS VALLEY, CA (October 4, 2022) – Late at night on Sunday in Grass Valley, a head-on crash killed one person and injured two other people. The October 2 crash occurred on State Route 20, close to the overcrossing for Slacks Ravine.

The time was roughly 10:20 p.m., the California Highway Patrol said.

A vehicle–described as an Oldsmobile–was traveling on State Route 20 and heading west. Authorities allege the driver was going at a fast speed.

For reasons that are not known, the Oldsmobile went into the lane of opposing traffic.

It collided head on with a vehicle described only as a Jeep.

Responders pronounced one person deceased at the crash site. He was identified only as a resident of Grass Valley, 47 years old.

His name has not been reported.

Responders transported two patients from the Jeep to hospitals in the area.

The two people suffered injuries that were described as moderate to major; their current conditions are not known.

Neither patient has been identified in reports.

Investigators are continuing their work on the crash details.