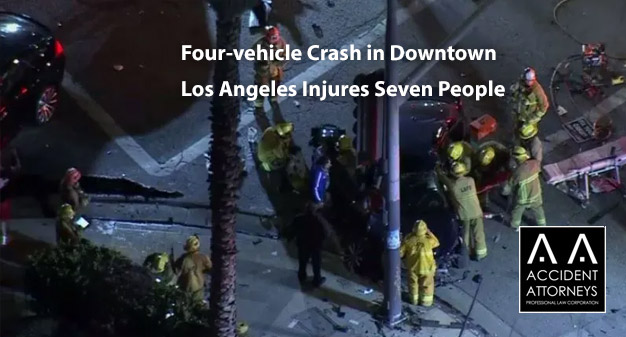 LOS ANGELES, CA (October 13, 2021) – Early in the morning on Tuesday in Los Angeles, four vehicles crashed in the downtown area. As many as seven people suffered injuries in the October 12 crash, which occurred in the neighborhood of Central Alameda.

Four vehicles crashed on East Washington Boulevard in the 1800 block, the Fire Department said. No details have been reported on the line of travel of each vehicle prior to crashing, nor the sequence of the crash.

None of the vehicles has been described.

Responders from the Los Angeles Fire Department arrived to help. They worked to extricate people from the wreckage of vehicles.

As many as seven people suffered injuries in the crash, reports say. The types of injuries the patients suffered, and their current condition, are not known.

None of the people involved in the crash have been identified, including their names, ages, genders, and cities of residence. The driver of each vehicle is not known.

Investigators are working to collect details in order to understand the crash, and its causes. The process is continuing.