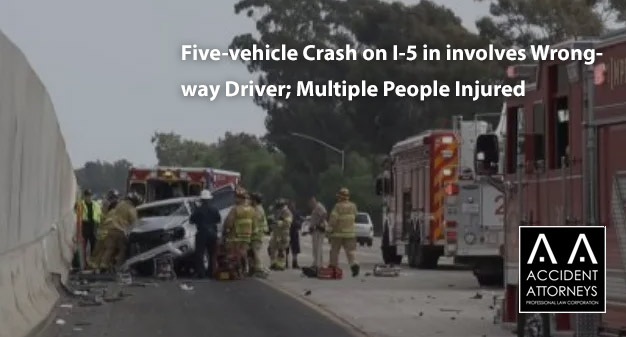 SAN YSIDRO, CA (September 27, 2021) – Early in the afternoon on Saturday in San Ysidro, five vehicles collided on I-5 when a driver traveled the wrong way. The September 25 crash occurred on the southbound side of the freeway, close to State Route 905 in the area of Otay Mesa West.

The time was roughly 2:00 p.m., the California Highway Patrol said.

Five vehicles were involved in the crash. The other vehicles have not been described, nor has the sequence that involved the last three vehicles.

Reports say multiple people were injured in the crash. The identities of the injured people, and the types of injuries they suffered, have not been reported.

None of the drivers have been identified in reports.

Investigators are continuing their process of collecting information and details.

If you or a loved one has been injured in an auto collision, the AA Accident Attorneys strongly encourage you to call our San Ysidro car accident lawyers. Your experienced Car Accident Lawyer San Ysidro will provide you with the best legal representation and guidance that you need. Our offices are conveniently located throughout California and we conduct regular travels in the region to meet with clients. Contact Car Accident Lawyer today.