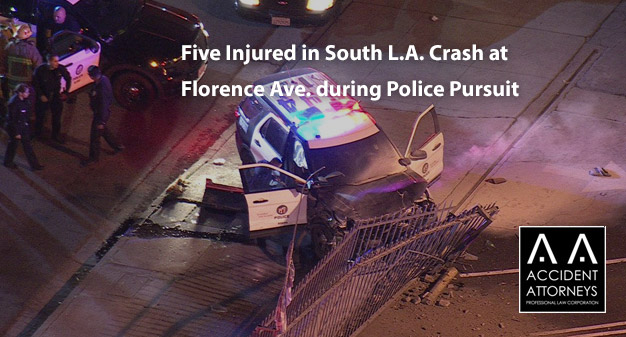 LOS ANGELES, CA (April 4, 2022) – Early in the morning on Thursday in South Los Angeles, three vehicles collided in the Florence area during a police pursuit. Five people were injured in the April 14 crash, which occurred where Main Street and Florence Avenue intersect.

The time was roughly a little before 1:00 a.m., Detective Aguilar said. Aguilar is with the Los Angeles Police Department.

The incident began when officers began pursuing a vehicle in the vicinity of San Pedro Street and 82nd Street. Reports say officers were pursuing the vehicle because it was suspected as being stolen.

After roughly half an hour, the pursuit resulted in a crash involving three vehicles.

Responders transported the suspect to the hospital for treatment. The types of injuries he suffered are not known. He has not been identified in reports.

Two other drivers and two passengers were also injured in the violent crash.

The types of injuries suffered by the people, and their current conditions, are not known.

None of the people involved in the crash have been identified.

Their vehicles–which had significant damage following the crash, reports say–have not been described.

Investigators are working on the incident.