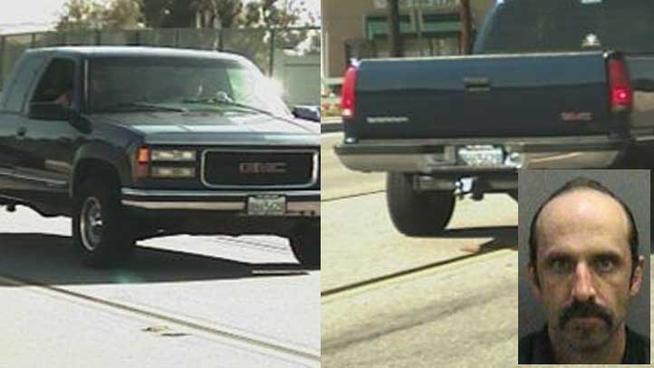 On Wednesday, police released photos of a truck and its driver who they believe intentionally caused a fatal hit-and-run. The accident happened in Orange Tuesday night and police are asking the public to help find him,

At about 9:40 p.m., a GMC Sierra pickup truck a Ford Explorer. The accident happened in the 1500 block North Tustin Street between Van Owen and Chestnut avenues, said Orange Police Lt. Fred Lopez in a news release.

When the GMC struck the Ford, the Ford rolled, ejecting the driver. The 20-year-old driver was from Corona and died later at the hospital. A woman, 18, was also ejected from the Ford and is recovering at the hospital.

The GMC driver fled the scene and is wanted in connection with the homicide, police said. The GMC truck is a dark blue 1999 GMC Sierra pickup with the extra cab. The license plat reads 8H65628. Police believe the GMC driver knew one of the occupants in the Ford.

The driver of the truck is believed to be Christian Thomas McQueen, 43. He may be heading to Stockton where he has relatives.

“We do know there was some type of altercation. These things generally don’t happen by accident,” Orange Police Lt. Fred Lopez said in an interview with NBC Los Angeles. “But until we get the other statement from Christian McQueen, then we can start putting the pieces of the puzzle together.”

Anyone with information should to call the Orange Police Department at 714-744-7444.