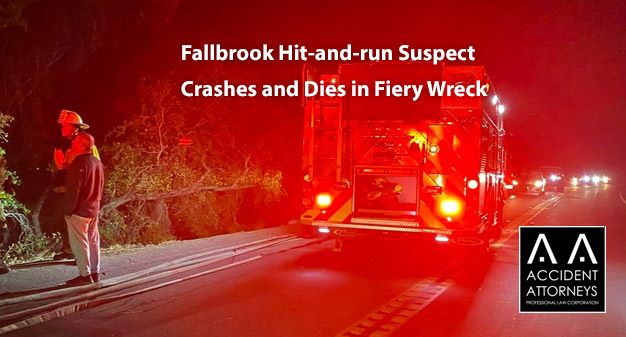 FALLBROOK, CA (March 16, 2022) – Late at night on Monday in Fallbrook, a driver suspected of hit-and-run crashed, and was killed in the fiery wreck. The March 14 wreck occurred at Reche Road close to Green Canyon Road.

Not long before the wreck, the driver was involved in a hit-and-run crash, police suspect, on East Fallbrook Street. According to the California Highway Patrol, the driver had been traveling eastbound on the road in an SUV described as a Chevrolet Tahoe.

The Tahoe struck the back end of a pickup truck, described as a Chevrolet 3500. The pickup truck was disabled in the road, the California Highway Patrol said, when the crash occurred near Debby Street.

According to Hunter Gerber, who is a public affairs officer with the California Highway Patrol, the Tahoe’s driver fled the crash site. The SUV went off the roadway at Reche Road, plunged down a slope, smashed into a tree, and erupted in flames.

Responders found the driver died at the crash site. He was identified only as 52 years old. His name and city of residence have not been reported.

The driver of the pickup truck was reported uninjured in the crash. The person has not been identified.

Investigators are working on the crash details.

Hire an Accident Attorney in Fallbrook

If you or a loved one has been injured in an auto collision, Accident Lawyer strongly encourages you to call our Fallbrook car accident lawyers. Your experienced Car Accident Lawyer Fallbrook will provide you with the best legal representation and guidance that you need. Our offices are conveniently located throughout California and we conduct regular travels in the region to meet with clients. Contact Car Accident Lawyer today.