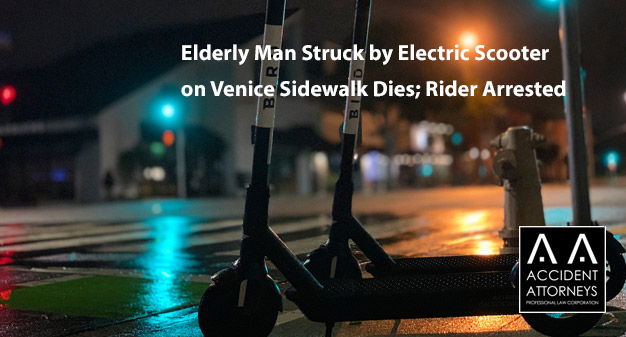 LOS ANGELES, CA (June 2, 2021) – On Saturday night, an elderly man died after he was struck by a motorized scooter on a sidewalk in Venice. The May 30 crash occurred on Lincoln Boulevard.

The pedestrian was on the sidewalk, reports say, and a vehicle–described as a motorized scooter–hit him. The victim’s head struck the pavement, according to the Los Angeles Police Department.

Responders arrived to help, but the man died later from the injuries he suffered. He was identified only as 91 years old. His name and city of residence have not been reported.

The people who had been riding the scooter were thrown from it when the collision happened. The passenger was identified only as female.

Her name, age, and city of residence have not been reported. It is not known if she was injured in the crash.

The person who had been driving the scooter was identified as James Cody Skene, 29 years old. Skene stayed at the crash site.

Authorities arrested him on suspicion of DUI. It is not known from reports if Skene was hurt in the incident.

Investigators are continuing their work on the crash. If anyone has information about the incident, the person can contact the detectives at the West Traffic Division. The numbers are 213-473-0234, or 213-473-0222.

If you or a loved one has been injured in an auto collision, AA Accident Attorneys strongly encourages you to call our Venice car accident lawyers. Your experienced Car Accident Lawyer Los Angeles will provide you with the best legal representation and guidance that you need. Our offices are conveniently located throughout California and we conduct regular travels in the region to meet with clients. Contact Car Accident Lawyer today.