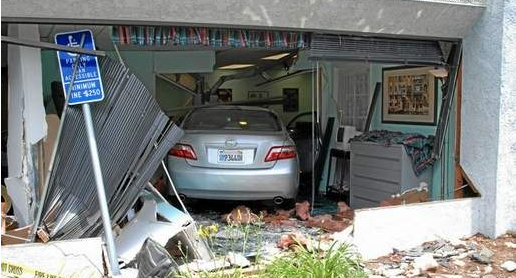 One woman was hospitalized with minor injuries after an elderly 85-year-old man crashed into an Encino office building Monday authorities said. The elderly man mistakenly stepped on the accelerator instead of the brake, slamming into the building.

The crash occurred at 5435 Balboa Blvd., just south of the 101 Freeway. It was reported around 11:45 a.m., according to Fire Department spokesperson Brian Humphrey and Los Angeles Police Department Sgt. Kurt Smith of Valley Traffic Division.

“Basically, we have an 85-year-old man who misapplied the gas when he was trying to put on the brake,” Smith said in an interview with The Los Angeles Daily News. “And he ended up crashing his car into an office, where a woman who was working was slightly injured.”

The driver of the car was not hurt, but the injured woman was transported to a nearby hospital, Humphrey said. Smith said the man was not cited, though his driving privileges could be in jeopardy. “We’re going to notify DMV and give him an emergency reevaluation,” Smith said. “He’ll have to pass a driving test to keep his license.”

Smith went on to say that these types of accidents occur frequently with elderly drivers.

“In this case, it may be time for this gentleman to hang it up and stop driving,” Smith said.