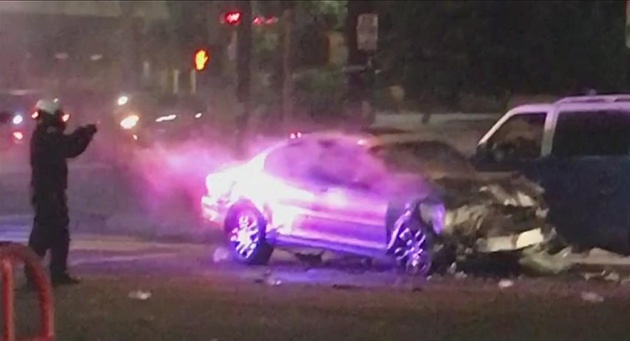 A suspected DUI driver, 2 of his passengers, and 5 other individuals were injured in a multiple-vehicle collision following a brief police pursuit near a busy North Hollywood intersection Wednesday night, Oct. 4th. The incident occurred shortly after 9:30 p.m. when 2 motorcycle officers attempted to stop the driver of a Jaguar that had been speeding down Lankershim Boulevard with its lights off. The suspect refused to stop and a pursuit ensued. After about a minute, the suspect crashed his car into 3 other vehicles at the intersection of Vineland Avenue and Victory Boulevard. A preliminary investigation by the Los Angeles Police Department indicates that the Jaguar ran a red light at the intersection of Vineland Avenue and Victory Boulevard and struck a vehicle that was passing through the intersection on a green light. The Jaguar then collided into 2 more vehicles that were stopped at the intersection. Police were seen on a Dashcam video drawing their guns as they approached the vehicle while another officer was able to extricate the suspect from the Jaguar.

“I’m grateful, thank God,” said crash victim Kristy Orellana, who was in a Toyota with her mother when an airbag deployed in her face. “I just can’t express how grateful I am to be here and talking to you.”

Witness Peter Lopez, who was at a nearby park when he saw the two officers initiate the chase, said, “It took the red light and all you hear was a bang. That’s all I see and that’s all I heard. You could hear it from the park, just sounded like a big thud.”

2 crash victims were transported by ambulance from the scene to a local hospital, including a woman who suffered a broken clavicle. The suspected DUI driver, who suffered internal injuries and 2 of his passengers, with minor injuries, were also transported to a nearby hospital according to authorities. 2 remaining injured individuals were treated at the scene for minor cuts and bruises. The suspect was later discharged into police custody. He was initially wanted for reckless driving but now faces charges of suspicion of driving under the influence and evading police. His passengers were not suspected in the chase and were subsequently released.

If you or a loved one has been injured in an auto collision, AA-Accident Attorneys P.L.C. strongly encourages you to call our car accident attorneys at 1.888.607.1425 for a free consultation. Our highly skilled and experienced attorneys will provide you with the best legal representation and guidance that you need. Our offices are conveniently located throughout California and we conduct regular travels in the region to meet with clients. Reach out to us directly to speak with a car accident attorney whenever you need one!