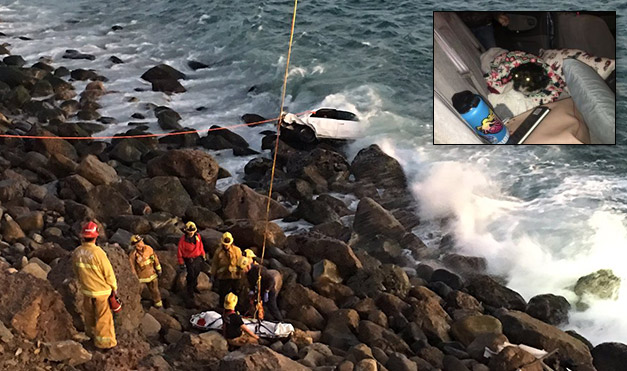 A 92-year old Ventura resident was identified Wednesday after his vehicle went over the side of Pacific Coast Highway and plunged 50-feet into the ocean near Point Magu Rock in Ventura County, Tuesday evening Jan. 23rd his dog was the lone survivor of the fatal accident. Around 5:00 p.m. California Highway Patrol dispatchers received reports of a single-vehicle accident involving a vehicle that, according to witnesses, “flew off” the cliff at Mugu Rock, a popular tourist destination near the town of Port Hueneme and the city of Oxnard. Sheriff’s officials said the vehicle went off the roadway and down a 50-foot embankment. The car was found on the rocks below and had sustained heavy damages and was partially submerged. Ventura County Fire Department crews rushed to the scene to find that the driver had been ejected from the vehicle. The deceased driver was recovered from the water with the help of a crane provided by the VCFD.

A dog, identified as Jake, was discovered inside the wrecked vehicle. A witness named Scott Welcher said he and a park ranger made their way down the steep embankment after observing the dog outside the vehicle and grabbed him. The witness looked after the dog until Animal Services arrived at the scene. Animal Services said Jake was doing well and is expected to be okay. A Ventura County helicopter was deployed to the scene and flew overhead in search of additional survivors, using thermal imaging to search the area. The helicopter was called off when it became too dark and rescue swimmers were called in help with the search. The rescue crews found no other victims in the water or surrounding areas.

The Ventura County Sheriff’s Office is investigating the death as a suicide, an agency spokesperson said. Capt. Garo Kuredjian, the Sheriff’s spokesperson said the incident was being investigated by sheriff’s personnel, not CHP, due to the criminal nature of the events. “Suicide is illegal,” he said. Capt. Kuredjian also said the victim may be related to an alert issued by Ventura police on Tuesday evening regarding a possibly suicidal person. The Ventura County Medical Examiner’s office identified the driver Wednesday afternoon but due to the nature of his death authorities are not releasing his name. The vehicle remained on the rocks overnight, as the tide was too high to tow. The vehicle was subsequently removed from the ocean around 9:00 a.m. Wednesday morning.