San Diego Driver Smashes into Tow Truck on Shoulder of I-5, and is Killed 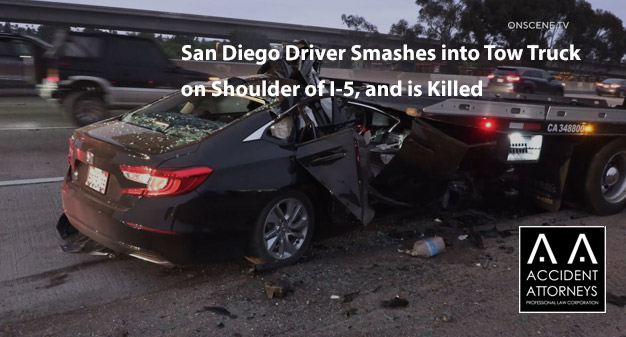 Driver Smashes into Tow Truck on Shoulder of I-5 in San Diego, and is Killed

SAN DIEGO, CA (June 21, 2021) – On Friday night in San Diego, a driver was killed when he smashed into a tow truck that was stopped on the shoulder of I-5. The June 18 crash occurred near the exit for Main Street in the Barrio Logan vicinity, on the southbound side of the freeway.

The time was roughly 8:10 p.m., according to authorities.

The tow truck had stopped on the shoulder of the freeway, reports say, to help a driver. A vehicle–described as a Honda Accord, black in color–smashed into the back end of the tow truck. According to witnesses, the Honda had been going at a fast speed, reports say.

Responders arrived and found the car lodged under the the tow truck’s flatbed. The Honda began to burn after the crash, and the fire was extinguished by the tow truck driver.

Authorities have not identified the driver who was killed.

If you or a loved one has been injured in an auto collision, The AA Accident Attorney strongly encourages you to call our San Diego car accident lawyers. Your experienced Car Accident Lawyer San Diego will provide you with the best legal representation and guidance that you need. Our offices are conveniently located throughout California and we conduct regular travels in the region to meet with clients. Contact Car Accident Lawyer today.