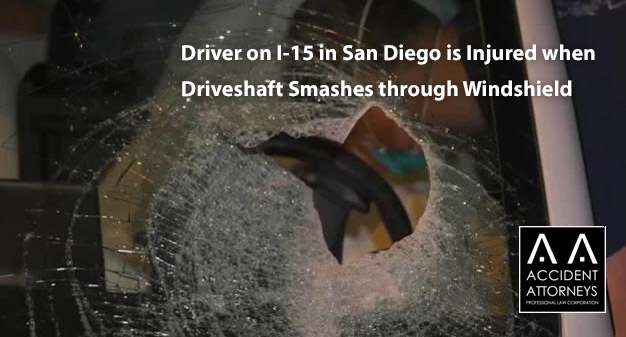 SAN DIEGO, CA (September 8, 2021) – A man who was driving on I-15 in San Diego was injured early in the morning on Tuesday when a driveshaft smashed through his windshield. The September 7 incident occurred in the area of Mission Valley, on the northbound side of the freeway.

The time was roughly a little before 5:00 a.m., according to San Diego Fire-Rescue.

Firefighters said he told them he had been heading north on the freeway, and a driveshaft from a vehicle–which has not been described–crashed through the windshield of his Tesla and struck him in the face.

The Tesla had a hole in the windshield, and the glass from the Tesla’s roof was broken.

The man suffered injuries to his face. He was transported to a hospital.

His current condition is not known. His identity, including name, age, and city of residence, has not been reported.

Investigators are working to collect information about the incident, and to find the vehicle that lost the driveshaft.