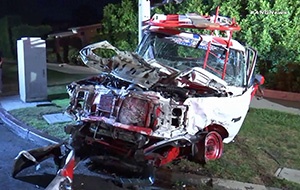 September 6th ─ 1 man is dead and 2 other men were hospitalized after a hit-and-run driver crashed into another vehicle after fleeing the scene of a first collision where he struck a pedestrian in Hancock Park, early Wednesday morning. The initial incident occurred around 12:45 a.m. near the intersection of South Normandie Avenue and Beverly Boulevard where Los Angeles Police Department officers responded to reports of a white pickup truck striking a pedestrian in the crosswalk. The driver then fled westbound on Beverly Boulevard where he ran a red light and collided with a vintage Ford Bronco that was traveling northbound on North Highland Avenue, according to witnesses at the scene. Witnesses also said the driver of the white pickup truck driving at over 70 mph, hit the Ford Bronco, came to rest against a light pole, and was ejected from his vehicle.

The suspect was pronounced dead at the scene by first responders and was not immediately identified. The pedestrian, a man in his 50s, suffered several minor injuries and was transported by ambulance to a local hospital where he is expected to recover, according to medical personnel. The driver of the Ford Bronco suffered fractured ribs and vertebrae. He was treated on scene and later transported by ambulance to Cedar-Sinai Medical Center where he was later listed in stable condition. He is expected to make a full recovery. Ryan Lindberg, the driver of the Ford Bronco, described his ordeal to reporters saying, “When I looked right, he was going so fast but he hit me before I could take my foot off the gas pedal. The car hit me and I just remember being on top of a retaining wall and in a tree.”

During the 2nd collision with the Ford Bronco, a metal spring from the vintage truck flew off and crashed through the window of a nearby home, where it nearly struck an infant who was sleeping in its crib. The piece of metal hit the child’s crib, breaking part of it, and bounced away from the child. “We walked inside and his room literally looked like a war zone. There was glass all over, his crib was shattered,” said the father, who didn’t not want to be identified. “Thank God he was OK, though.”

Investigators combed the scene and found empty beer containers inside the suspect’s truck. It is unclear whether the suspect was under the influence of alcohol at the time of the collisions. Beverly Boulevard has been closed from Normandie Avenue to Highland Avenue while detectives conducted their investigation.

If you or a loved one has been injured in an auto collision, AA-Accident Attorneys P.L.C. strongly encourages you to call our car accident attorneys at 1.888.607.1425 for a free consultation. Our highly skilled and experienced attorneys will provide you with the best legal representation and guidance that you need. Our offices are conveniently located throughout California and we conduct regular travels in the region to meet with clients.